Calgary was confirmed as one of the first of four municipalities selected to receive funding from the Year-Round Community Tennis Court Program announced earlier this year. Completed on schedule, the project at the ATC, which services approximately 30,000 Calgarians, ensures its five previously outdoor-only courts will remain active throughout the fall and winter seasons, yielding 70,000 hours of court access to members and visitors.

In addition to the Year-Round Community Tennis Courts Program presented by Rogers, funding for the project came from various partners including the Province of Alberta, the Parks Foundation of Calgary, donations from the tennis community, and the ATC itself.

As a result of the expansion, the ATC will be able to grow several programs. The club’s High Performance Training Program is expected to take in an additional 30-50 children per week, meeting Tennis Canada and Long-Term Athlete Development (LTAD) guidelines. The ATC’s SHE CAN PLAY Girls’ tennis program, School Tennis Program and Wheelchair & Autism programs anticipate significant growth as well

The new bubble will also provide ATC with the ability to expand its events portfolio. This week (November 6-13, 2022) the venue will host the Calgary National Bank Challenger Tournament which for the first time is a combined (Women’s and Men’s) event and the only indoor professional sporting event of its kind in Canada.

“We are thrilled that the bubble was completed on time, and we can offer the public increased access to year-round tennis, especially as we head into the winter months,” says Danny Da Costa, CEO of OSTEN & VICTOR Alberta Tennis Centre. “Our partners continue to provide the ATC incredible support for this project and to see it come to life is wonderful. As the Calgary National Bank Challenger gets underway, we can also offer attendees a firsthand look at the new bubble and the additional programs we can now offer.”

“The completion of this tennis bubble is a tremendous milestone for the tennis community here in the Calgary and for the ATC Board. This important addition to the ATC will now support our vision of offering one of the finest tennis facilities of its kind in Canada,” says Ron Ghitter, Chair, OSTEN & VICTOR Alberta Tennis Centre. “These five covered courts can now allow for significant growth of the sport and can accommodate the increased demand for access to our facility.” 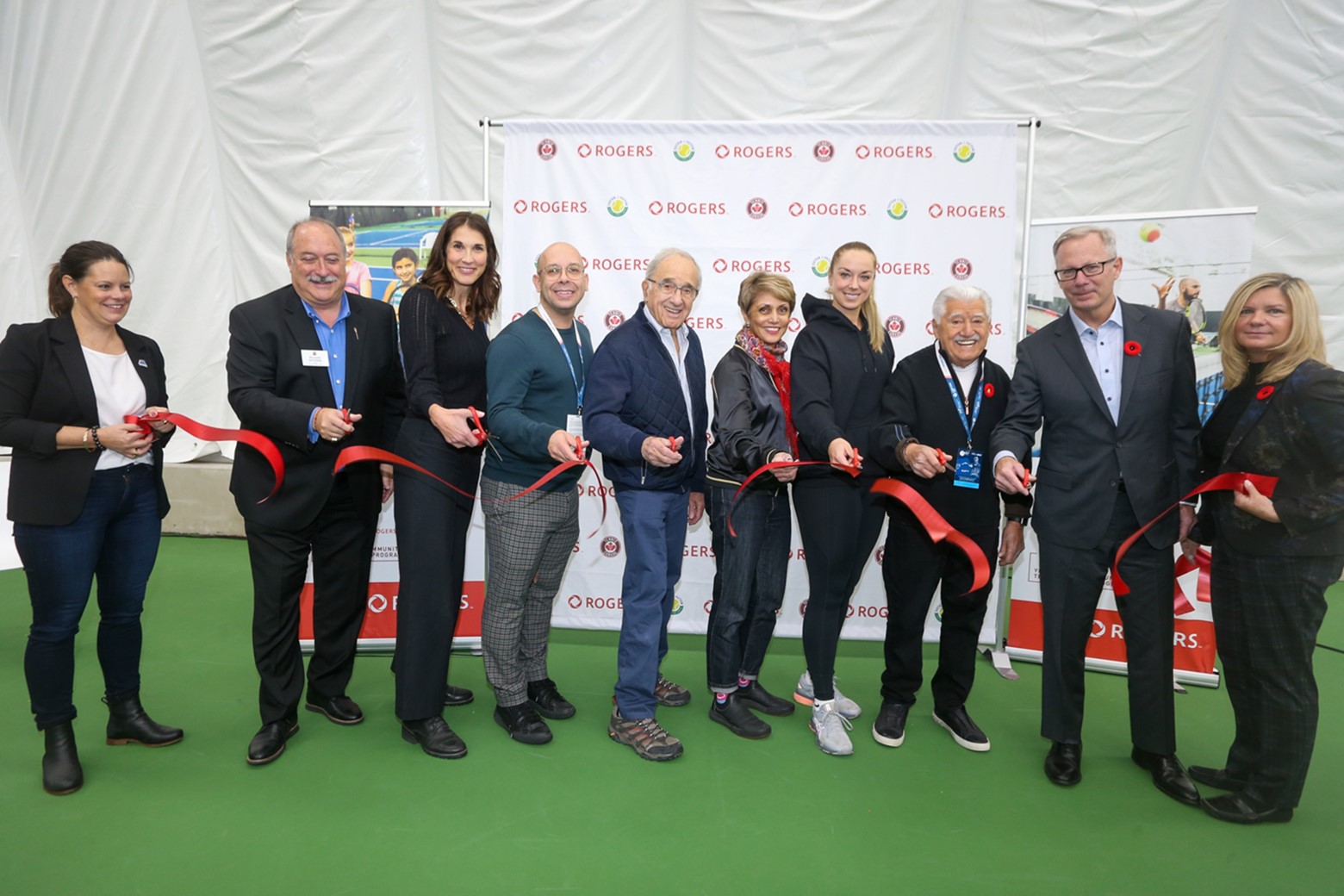 “The grand opening of the five-court bubbled facility at OSTEN & VICTOR Alberta Tennis Centre is another moment of significance for this program,” comments Michael Downey, President and Chief Executive Officer, Tennis Canada. “We would like to thank our partner, Rogers, for their support in making these projects a reality through the instrumental capital seed money they have provided. Our thanks must also go to the City of Calgary, as well as Danny Da Costa and the operators of OSTEN & VICTOR Alberta Tennis Centre. This project is just one of many as we continue to deliver on our promise to make year-round tennis available to Canadians across the country.”

“We are proud to join Tennis Canada in enabling the growth of the sport through the new year-round covered tennis courts which will provide even more opportunities to keep young people active in their communities and support the next generation of Canadian athletes,” says Robert Dépatie, President and Chief Operating Officer, Home and Business, Rogers Communications.

Funded jointly by Tennis Canada and Rogers, the $5.6 million Year-Round Community Tennis Court Program is making year-round tennis a reality for thousands of Canadians and helps foster increased participation amongst youth. The program aims to build 160 year-round courts at up to 30 facilities over the next seven years. The investment addresses the fact that Canada currently falls behind other leading tennis nations in providing access to the sport 12 months a year, with only 750 publicly accessible covered courts across the country. This represents only one year-round court for every 50,000 people.

In addition to the project at the ATC, another air-supported “bubble” installation is set to be unveiled at Club de Tennis François Godbout in Waterloo, QC, before the end of the year. These follow the grand openings of six-court and five-court domed facilities at Premier Racquet Clubs in Markham, ON, and at Ancaster Tennis Club in Ancaster, ON, respectively. Collectively, these four projects will increase court time opportunities for their communities by roughly 15,000 hours. Previously, these outdoor-only courts were rendered unusable for 50-75 per cent of the year.

As momentum for the Year-Round Community Tennis Courts Program presented by Rogers continues to grow, with 90 per cent of Canadians agreeing that municipalities should work with Tennis Canada on the initiative, you can learn more about the program and email [email protected] to find out how you can help kickstart a project in your municipality.

Founded in 1890, Tennis Canada is a non-profit, national sport association with a mission to lead the growth of tennis in Canada and a vision to become a world-leading tennis nation. We value teamwork, passion, integrity, innovation and excellence. Tennis Canada owns and operates the premier National Bank Open presented by Rogers WTA and ATP Tour events, four professional ATP and ITF sanctioned events and financially supports four other professional tournaments in Canada. Tennis Canada operates junior national training centres/programs in Toronto, Montreal, Vancouver and Calgary. Tennis Canada is a proud member of the International Tennis Federation, the Canadian Olympic Committee and the Canadian Paralympic Committee, and serves to administer, sponsor and select the teams for Davis Cup, Billie Jean King Cup, the Olympic and Paralympic Games and all wheelchair, junior and senior national teams. Tennis Canada invests its surplus into tennis development. For more information on Tennis Canada please visit our Web site at: www.tenniscanada.com and follow us on Facebook and Twitter.

Founded in 2013 and opened in 2016, the OSTEN & VICTOR Alberta Tennis Centre is a staple of the Acadia and Calgary community. Annually, it services 30,000 Calgarians and its programs are operating at full capacity with long waiting lists to join. By covering its five existing outdoor courts, the Centre will increase year-round public access to tennis and will ensure it is able to service 3,700 more court hours during the winter months, adding to their pre-existing eight indoor courts.

A photo accompanying this announcement is available at https://www.globenewswire.com/NewsRoom/AttachmentNg/4f709d2e-acb6-4a7f-9b93-e7200421d512